We have been keeping Bees since around the mid 1980’s, when my father started keeping bees again for his second time, He first started keeping bees when he did his National Service at Catterick Garrison, where when he wasn’t on duty he help one of the Major’s living on site maintain his Bees, When he finished his service the Major gave him his first hive of Bees, that at the time due to his other commitments he passed on the hive to his Uncle that farmed on the Blackdown Hills. But then in the mid 1980’s he started Beekeeping again, only in a small way just for Honey, and then as a young lad as I was then I got interested and helped him with his Beekeeping, then around 2010 he let me have a swam of my own and slowly due to his age over the last few years I have taken over the Beekeeping.  I have decided to breed the bees rather than to produce Honey, due to the decline in the UK Bees, So my plan now from this year 2021 is to sale Nuc’s of Bees and Queen Bees and some Bee Equipment, to hopefully help start New Beekeepers off with their plans.

Over the years we have mainly started off with Buckfast Bees and added the odd Nuc of either Carniolan or Italian Bees to our Colony, mainly just to change the Gene slightly to stop interbreeding the same strain which some believe that can make the Bees more aggressive, but also by adding other strains you can increase the Honey and make the Bees more hardy to help cope with surviving the winter, but we only add other strains at a very low level due to the risk of other foreign bees bring in problems like disease ect.

This will be our second year of selling Bees,

Most of our Nuc’s and Queens we are planning to produce will be Local Bees, (Locally reared from our own stock).

We will be planning to sell a few established hives of bees (inc 1 or 2 supers) around end of June/July.

With our Nuc’s we can allow collection or we can deliver via our own poultry couriers right up to around the lower half of Scotland, we will Not be using any parcel company or Royal Mail to deliver Nuc’s but we can post Queen bees via Royal Mail post.

We are planning to graft some Queen’s from mainly our Local own stock and a hive of Carniolan and a hive of Romanian Ligustica Bees, so hopefully this year we will have three options available.

Non-refundable deposit is required, a five framed Nuc with Mated Queen this year will be £180 to £200. 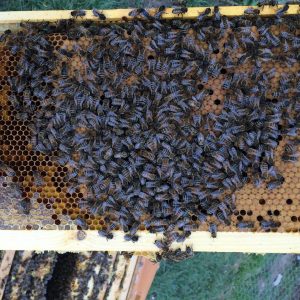